A Lust for Lists: How to Master the Art of List-Making.

Are you a list-maker? Do you organise your chaos, bullet-point your dreams and streamline your shopping with lists, lists, lists? If so, you are in wonderful, cooky, logical, productive, creative company.

Every list-maker has their own system and tools: bullet points, symbols, stickers, different colours, dividing the page or just throwing it all down in one big download.

The beauty of list-making is that there’s no right or wrong way of doing it.

But whether you’re a ticker-offer or a crosser-offer, perhaps some of these shiny tips and insights will help you hone your list mastery.

Or perhaps you’ve been part of the list-resistance for years, in which case maybe now we can convince you to crack the spine of that notebook and give it a go.

“In order to make sure I achieve everything that not only needs to get done but also everything I want to get done, I make lists – lots of them. I have always lived my life by making lists. These vary from lists of people to call, lists of ideas, lists of companies to set up, lists of people who can make things happen. I also have lists of topics to blog about, lists of tweets to send, and lists of upcoming plans. Each day I work through these lists. By ticking off each task, my ideas take shape and plans move forward.”

And goodness only knows how far forward Mr. B has gone. Space no less! - well nearly!

THE SIMPLEST WAY TO MAKE LISTS WORK FOR YOU
If you’re at a loss as to where to start, try this method for size and see if it helps you become more productive through the week: Being a fervent note-taker and list-maker, Branson actually seems to be bucking the more female-skewed trend. He even said it in another more general article about note-taking that he’d noticed how “women (were) more likely to be note takers in meetings because there is an unfair expectation on them to do support work. In other words as a society, we expect the office housework to fall to a woman.”

And it seems that it’s the case at home too. But possibly self-inflicted.

In her BBC Radio 4 programme, Listless, Jenny Eclair notes the same phenomenon about lists - it seems that the world’s list-makers are women.

LISTS IN THE HANDBAG
A fascinating art exhibition by Alice Instone seemed to confirm this too. ‘The Pram in the Hall’ featured to-do lists of public figures and they reveal so much about the juggling that goes on in women’s lives. You can read about it here in the fantastically headlined Guardian article: “Save the World then Ice a Cake”

There are no lists in her exhibition from men, “because, there hardly were any”. But, she observes in Jenny Eclair's programme, it seems that we have many self-imposed tasks on our lists like grooming, thank you letters, birthday cards and birthday presents, “Men don’t really seem to go in for that,” says Instone, “I think women suffer from guilt.”

What did feature in the exhibition were to-do lists belonging to public figures. It demonstrated the sheer spectrum of tasks - the fantastical and the mundane sitting one on top of another. Human rights activist, Shami Chakrabarti, had to:

“Buy a Christmas tree and re-read the counter terrorism bill.”

While Emma Freud had to “Call Jason Donovan and buy secret Santa gifts.”

And when asked if she could live list free herself, Instone relays a wonderful story:

“My memory’s not good enough to remember all the important things. I live in fear the whole time of forgetting something. I remember once it was the school photo and I got it wrong and I thought it was the dress-up Spanish day and I took my poor daughter to school in a Spanish costume.” There you have it. We really do need lists to help us remember everything.

So why, in this digital age, are so many still turning to paper? Well, it turns out there’s a double-whammy benefit to list-making on paper.

I can’t concentrate too well on the task in hand if I have so many other tasks and things to remember swimming around my brain. With so many to-dos tapping me on the mental shoulder all day, I get no peace and I’m less likely to remember them (or I remember at the wrong time, like when I’m driving and I can’t do anything about it). Getting it down on paper not only puts my thoughts into some sort of order but it also makes my tasks easier to remember.

It may be a subconscious decision on our part to opt for paper rather than the iPad, but…

THE PEN IS MIGHTIER THAN THE KEYBOARD
It is scientifically proven that the act of physically writing something down rather than typing it helps us remember things better. It lodges what we have written deeper in the brain. I like to think of it as pinning down those floating thoughts and mastering them rather than have them mastering me.

But there are some clever apps out there that may not help you engrave your tasks in your psyche quite as easily but they do make some nice noises when you ‘tick them off’.

DID YOU KNOW?
‘Productivity’ is the most popular category of apps out there and within that grouping are many list apps.

LISTS FOR FUN
And then there are the apps that make getting your tasks done even more fun.

Habitika is a gamified task manager in which you create an avatar that you effectively have to keep alive by completing good tasks while bad habits remove your character’s health. Talk about more guilt! The better you do in real life, the more content you unlock in the game. You can also play with friends to stay accountable in real life.

A cute idea and helpful for some for motivation perhaps, but honestly, for me, with a family of six to look after, adding another virtual dependent is the last thing I need!

Meanwhile, TaskTowers has a similar idea whereby every time you complete a task you get a brick for your virtual tower. But when you miss a task, your tower is knocked down and you have to start again. Seems harsh! I think I’ll stick to my ticks.

Li.st, which clearly states that it is not for groceries, is an app that steers us away from productivity and more towards procrastination and curiosity. Developed by the comedian/producer/writer BJ Novak (best known for his role as Ryan in the American Office) the app hosts a whole community of list makers and invites people to add to public lists and comment on others’ lists. Lists range from:

AND THEN THERE'S LISTOGRAPHY

I like this idea as it almost turns making lists into a philosophy while giving novices a helping hand. It helps anyone with a fear of the blank page. Similar to the idea of Li.st, Listography is available as an app AND as many physical journals with list prompts.

Featuring examples and quirky illustrations, titles include Food, Parenthood, Films, Music, Friends, Future, Love and there’s even a compilation book with a selection of list topics to capture your autobiography, promote creativity and revisit memories. There’s also one for kids with prompts like: List your favourite things about your family. There’s even a retro board game where the best list wins! Well all these list-lists have started to make my head spin. I probably ought to turn my attention to my own to-do list before ticking off ‘Notebook Love Blog about lists’.

I have a few oddities this week. In amongst the usuals of folding washing, the big shop and swimming lessons I have:

I’d better get on and get some of these ticked off! But before I do, what’s the oddest thing on your list? We’d love to hear in the comments below.

And we’d also LOVE to hear about your own method of listing. Do you have any hints or tips? Please do share your wisdom. We might even start a new list of notebook lovers’ list tips. We’ll put it on the to-do list!

such a good point

Such a lovely quality notebook. Love the fabric cover with the animals placed as per my request. Good quality thick lined paper. It is quite expensive, but as an indulgent treat in difficult times I was more than happy to order & would do so again as well as happily recommend to others.

I
Bee Slim Diary 2021. Week to View. Black and Gold. Sky and Miller. I.S.
Diary is great Shame about the sticker

The diary is very nice. I like the Notes section on each weekly spread.

Such a shame that the barcode sticker on the back makes a horrible sticky mess after 40 minutes trying to remove it, marring the smooth matt finish. Note also that the list of holidays in it is for Australia and New Zealand, not the UK. 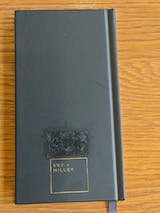 We were excited to find a "The Very Hungry Caterpillar" calendar, as our preschooler is a huge fan of the book. It's beautifully illustrated. There's columns for each person, so we can see at a glance who's meant to be where & when.

Ordering and delivery was quick and easy. Highly recommend!

Hi. I have tried to email however I have not had a reply. I never received my December order in the post. Can you help? Thanks, Emma.

Hi Emma. Many thanks for your feedback. And so sorry for your experience. I'm not sure whether you saw the email we sent you last week, but we have also messaged the seller, Ink Inc to ask them to get in touch. Perhaps you were meaning that they hadn't been in touch. I believe you did receive something in the post from them but it wasn't complete. Is that right? So sorry about that. Ink Inc. are currently closed due to their studio being shut but they have assured us this morning that they will be in touch to see how they can remedy this situation for you. We will keep a close eye on this situation for you and will continue to be in touch via email. However, if our emails are not getting through please do check your spam box or let us know if our emails aren't getting through. We want to fix this for you asap.